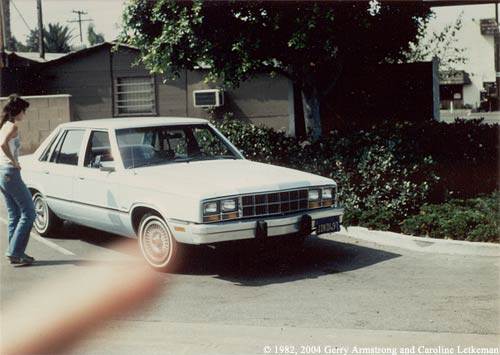 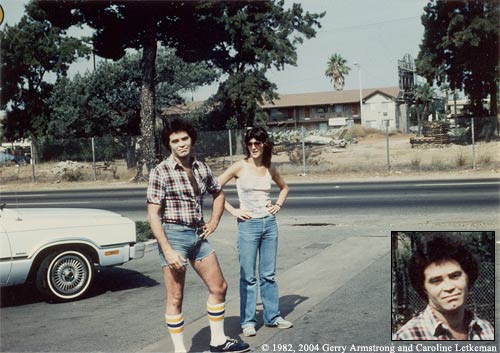 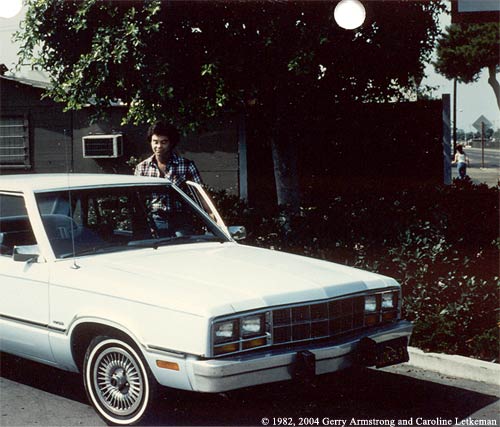 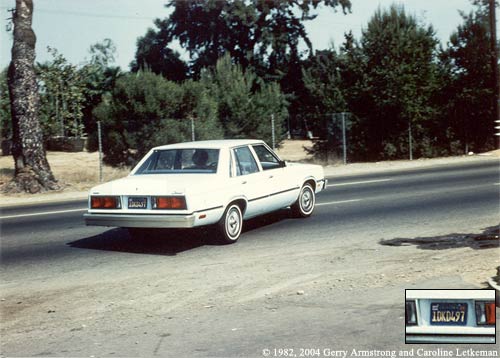 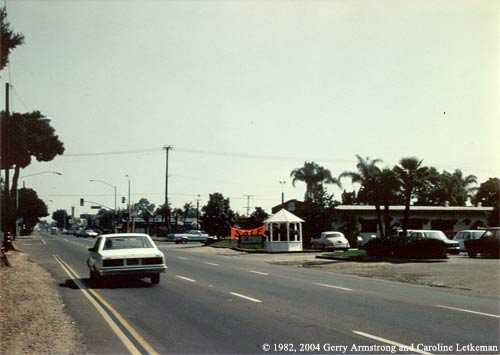 At approximately 8:30 a.m. I drove out of the driveway at the Ponderosa Mobile Estates property at 1991 Newport Blvd where I live to get some things at the store. I noticed before I got in my car a late model light blue car parked in the same location on the other side of Newport Blvd. where the yellow VW had parked, and from which I had been surveilled on August 20. I also noticed that there was someone sitting in this blue car at the time.

I proceeded north on Newport Blvd. then noticed that a light blue car was following me some distance back. I turned right on 22nd Street and drove two blocks east to Orange Street where I turned left.

I proceeded several blocks on Orange during which time I noted that the light blue car followed, approximately a block behind. I turned right on Santa Isabel Avenue, went down about a hundred yards, made a U-turn and proceeded back to Orange Street. The light blue car arrived before me and I was able to get behind it.

I noted that the driver was the same man I had seen at the phone and he was wearing the same plaid shirt. I wrote down the licence plate of the light blue car, which I believe was a Ford model 1DKD497. The car sped up, I followed for a block or so then returned home by 9:00 a.m.

At approximately 10:30 a.m. I noticed that what appeared to be the same light blue car was again parked on the east side of Newport Blvd. in the same location where my apartment could be surveilled.

I asked my wife Joyce to observe what went on and I took my camera, climbed a fence beside the trailer park, made my way along Bay Street to Newport Blvd. east side and to where the light blue car was parked.

I approached within 25 feet of this car and observed the same man in the driver’s seat. He was looking out of the driver’s side window toward my apartment with a pair of binoculars.

I also noted an antenna for a two-way radio sticking out of the passenger side window. When I was within 15 feet of this car the man spotted me and appeared to speak into the two-way radio which was visible, and he withdrew the antenna from the window.

I took a photograph of the car at this point. The man, a white man, approximately 6 feet in height, stocky build, longish kinky hair, wearing cut offs and the plaid shirt I had noted earlier, jumped out of the car and approached me.

I took one more photograph of him before he reached where I was standing. He was visibly angry. He said, very antagonistically, “Are you going to give me the film or am I going to have to smash the camera?”

He: “I’m just listening to the ball game.”

He then began pushing me, first with one hand then the other.

I said, “I saw a pair of binoculars and a walkie-talkie.”

He continued to push me backwards around the little parking space near the Ranch Market. And he began a long series of taunts which appeared to be designed to get me to do or say something which would give him a “valid” excuse to physically beat me or goad me into a fight.

When I protested and told him to keep his hands off me, that he was assaulting me, he then began pushing me with his chest. It seemed he wanted to push me out of the public view behind the buildings nearby.

He pushed his face very close to mine and antagonistically said: “You want a fight do you?”

“So you want to fight me. Are you a fighter? I’m not a fighter. I’ve never had a fight. So fight me.”

“What have you got to hide? What are you running from?”

“You’ve got no right to have my picture. I want the film. Or do I smash your camera?”

“Who are you? Where do you come from?” repeated over and over.

I tried several times to get him to identify himself and he responded with a verbal attack on me. This went on for perhaps 10 minutes when my wife who had been observing this incident arrived in our car. I asked her to pull up beyond his car so his car was not blocked as I thought he might ram our car.

My wife got out of our car and I asked her to go over to his car and observe that he had a pair of binoculars and a two-way radio in his car. He tried to prevent her from doing that. He said, “No, don’t do that.”

He approached my wife who was looking in his car and I took a photograph of the car again. At one point he came rushing up to me and put his hand over the lens of my camera.

I asked my wife to observe all that was going on and listen to the conversation. I used her name Jocelyn. He said, “Jocelyn, who’s Jocelyn? Some broad you’re living with? Is she your back-up?”

He came back to me and continued to back me up towards the back of the building.

He then spoke to my wife, “I’ve identified myself, what’s your name? ” She said, “Jocelyn.”

She then asked, “Who are you?”

I was then getting photographs and he put out his hand toward my wife as if to shake her hand in a friendly gesture.

He then approached me and said antagonistically, “Mr. Armstrong.”

My wife said, “How do you know his name?”

He replied, “I know everything about you.” He insinuated that he was well briefed on both me and my wife.

I then asked my wife if she had seen the binoculars and the walkie-talkie and she said she had. He then said “I was at the baseball game last night.”

I then asked my wife to go to the pay phone nearby and call the Costa Mesa police. She went and tried but got no answer at the Police number. Before she could place the call he got in his car and drove off.

My wife and I went to the Costa Mesa police facility to speak to a detective and give this report but the desk officer said that there was no one in to whom we could speak. We returned to our apartment.

I believe that this whole operation against me and my wife is being directed by Scientology, specifically L. Ron Hubbard. I also believe that our lives are at risk.

Scientology has a record of harassment, entrapment, and crimes against individuals who leave the organization.

I have been singled out because I possess knowledge concerning misrepresentations and fraud of L. Ron Hubbard and crimes committed by the organization.