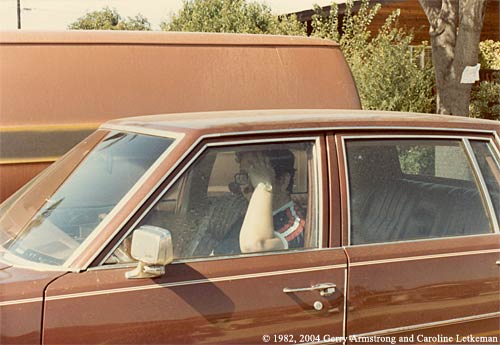 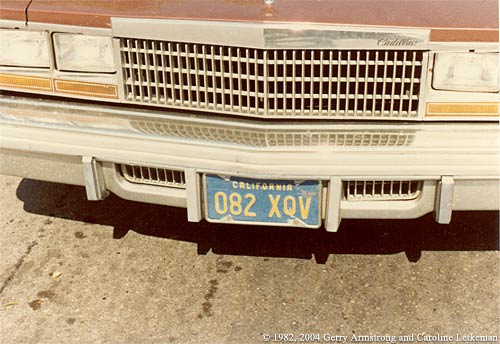 My wife made this entry in her log: “10:20 a.m. — We left our home to go run in a park. We forgot something and returned to our home. On the way we spotted 1CWP062. (This was the maroon Toyota, this time driven by Pusher.) We got what we needed and headed toward the park again. On our way out the driveway a maroon Cadillac was coming in, blocking our exit. The car and driver were on private property. He backed up in an effort to let us go first. I let him.

“He stopped at the end of the driveway and I pulled out. On the way to the park we stopped and took several photos of our follower. He is heavy set, dark curly hair with mustache and glasses. He parked right behind us at the park. We got out to run. I ran on the grass in the park. He watched us both until Ger ran out of view around the block. He then drove around the block. Ger returned and we went to the car.

“Before we took off on the intial run, Ger walked up to the guy in the car. The driver rolled down his window and Ger asked: “What’s your name? ” The driver said:”You can run a make on the car.”

GA: “Well I know that you are employed by Scientology. And I know that it is contained in their policy to use assassins and I know that sooner or later they are going to try to hit me, and you’re just feeding them information to make it easie.

Jocelyn:”Yeah, you are earning now the money we worked for for years in there and got robbed of. They started out paying $10.00 a week. And we joined thinking we were saving a planet! We found out it wasn’t true.”

“When we returned from the run he motioned Ger to go to his car. Ger told him to get out and talk in the street. Driver:”None of the people who are following you have anything against you.”

GA: “No, you’re feeding their data files, and they’ll use that data for a hit man to hit me later. It won’t be one of your people, but they’ll have all the information: where we live, where we work, what time we get up, what park we run in, where we eat lunch. At any time they can turn it over to an assassin. And in any case what you guys are doing is pure harassment, isn’t it?”

Driver: “Yeah it would bug me. But look at it this ways as long as we’re following you, you don’t have to worry. No one is going to try to kill you in front of a million witnesses. Once we’re no longer around, then you’re going to have to worry.”

“11:20 We drove around the park to the tennis area. The Driver (same maroon Cadillac licence #082 XQV) followed and ran another red light. We made a turn to go back and get a parking space we’d seen. The driver made a U-turn right after, despite on-coming car traffic and bicyclist.

(As an aside, all the drivers who have followed us have flagrantly disobeyed traffic rules, run red lights, cut off other drivers, etc. in order keep me and my wife in sight. This has been one of the unnerving parts of this operation; that some innocent by-stander will get hurt because of the followers’ determination to pursue us, and ultimately Scientology’s urge to harass and destroy me.)

(It is for this reason that I have tried to remain reasonably friendly with the followers and have not tried to lose them.)

We were followed everywhere we went the rest of the day.