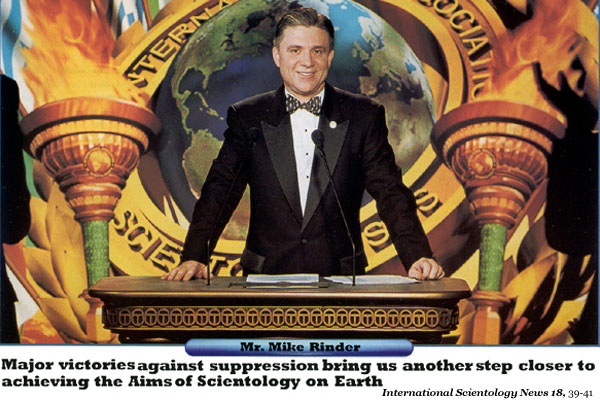 Along with bringing LRH tech to all levels of society, comes creating a safe environment in which we can provide that tech to ever greater numbers of people. To that end, Mr. Mike Rinder briefed those at the Patron Ball on the big picture of our progress on the external front, and how we are creating that safe environment for the continued expansion of Scientology.

He began with France, where suppressives have been vocal recently — but where they have now come up against a force they didn’t bargain on: us.

France, he pointed out, has a long track of religious intolerance, in a country that “hypocritically proclaims it stands for liberty, equality and fraternity.

“With that sort of bank agreement, it’s no surprise this country has been a magnet for SPs.

“And those quarters are equally rife with corruption.

Their prime target is the field of religion — since religion stands as the only barrier to their materialistic theories of social control. Up to now, the SPs have been able to get away with their game of abolishing religion and its values in France — that is, until we came along.

And as he noted, now that we’re in the fight, their tactics are “more extreme and desperate than ever.”

Turning the tides in Germany

From France, Mr. Rinder traveled across to Germany, where, as he put it, “we have progressed a bit further, using our third dynamic tech to handle suppression and assume a leadership role.”