SPDL Note: This Scientology recruitment flyer identifies the component of the cult ostensibly responsible for the execution of the “Suppressive Person” doctrine against the cult’s enemies, people identified as “SPs.” The aggressive, antisocial, abusive, and often criminal, treatment of SPs, which the SP doctrine mandates, cult founder L. Ron Hubbard called “Fair Game.” The claimed Hubbard quote, as it is used in the flyer, also is intended to create the illusion that OSA is the cult component responsible for Fair Gaming and obliterating the cult’s “enemies,” the SPs. In actuality, it is David Miscavige, and OSA’s seniors in Religious Technology Center, who identify SPs for targeting, enforce the Suppressive Person doctrine and Fair Game, and operate OSA as a personal army and intelligence organization, just as Hubbard ran the infamous Guardian’s Office, as his personal army and intelligence organization, before he renamed it OSA. 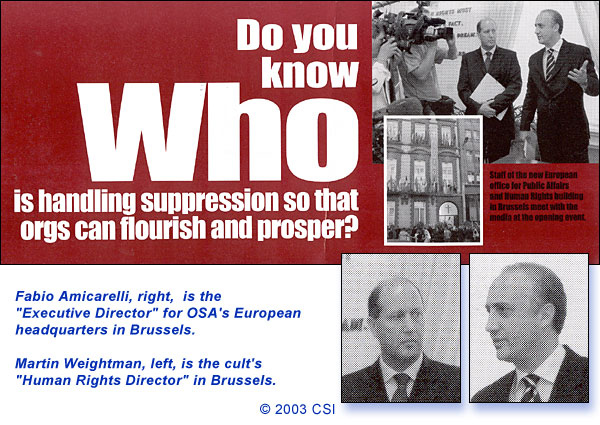 Do you know Who
is handling suppression so that orgs can flourish and prosper?

[Image caption]: Staff of the new European office for Public Affairs and Human Rights building in Brussels meet with the media at the opening event. 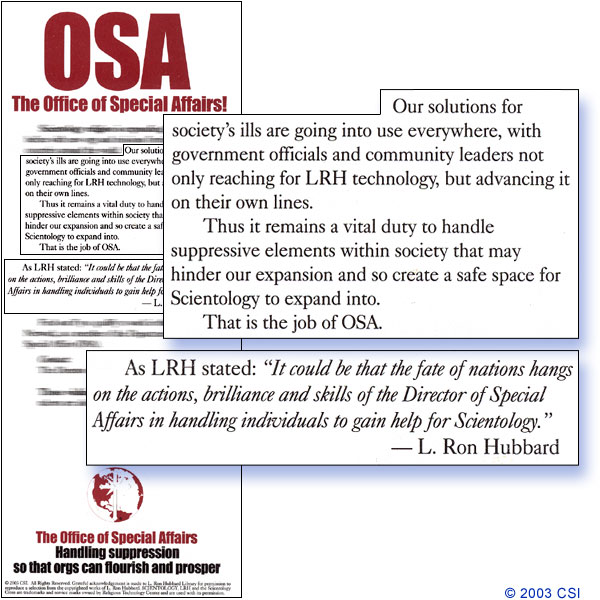 OSA
The Office of Special Affairs!

[…] Our solutions for society’s ills are going into use everywhere, with government officials and community leaders not only reaching for LRH technology, but advancing it on their own lines.

Thus it remains a vital duty to handle suppressive elements within society that may hinder our expansion and so create a safe space for Scientology to expand into.1

That is the job of OSA.

As LRH stated: “It could be that the fate of nations hangs on the actions, brilliance and skills of the Director of Special Affairs in handling individuals to gain help for Scientology.”

© 2003 CSI. All Rights Reserved. Grateful acknowledgement is made to L. Ron Hubbard Library for permission to reproduce a selection from the copyrighted works of L. Ron Hubbard. SCIENTOLOGY, LRH and the Scientology Cross are trademarks and service marks owned by Religious Technology Center and are used with its permission.3