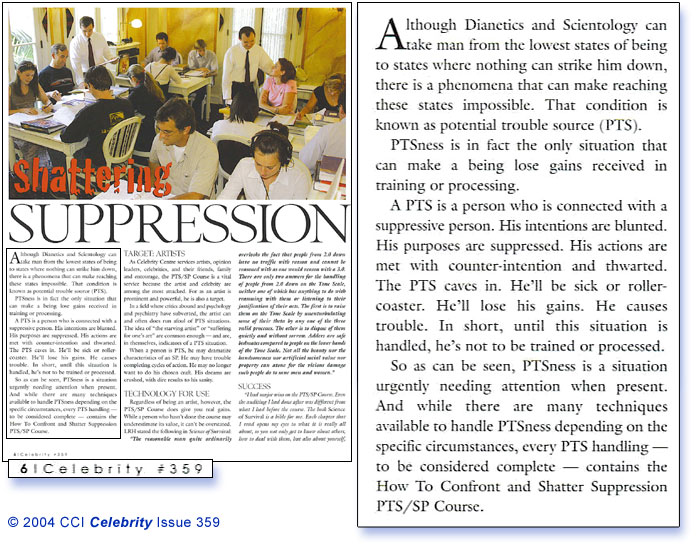 Although Dianetics and Scientology can take man from the lowest states of being to states where nothing can strike him down, there is a phenomena that can make reaching these states impossible. That condition is known as potential trouble source (PTS).

PTSness is in fact the only situation that can make a being lose gains received in training or processing.

A PTS is a person who is connected with a suppressive person. His intentions are blunted. His purposes are suppressed. His actions are met with counter-intention and thwarted. The PTS caves in. He’ll be sick or roller-coaster. He’ll lose his gains. He causes trouble. In short, until this situation is handled, he’s not to be trained or processed.

So as can be seen, PTSness is a situation urgently needing attention when present. And while there are many techniques available to handle PTSness depending on the specific circumstances, every PTS — handling to be considered complete — contains the How to Confront and Shatter Suppression PTS/SP Course. 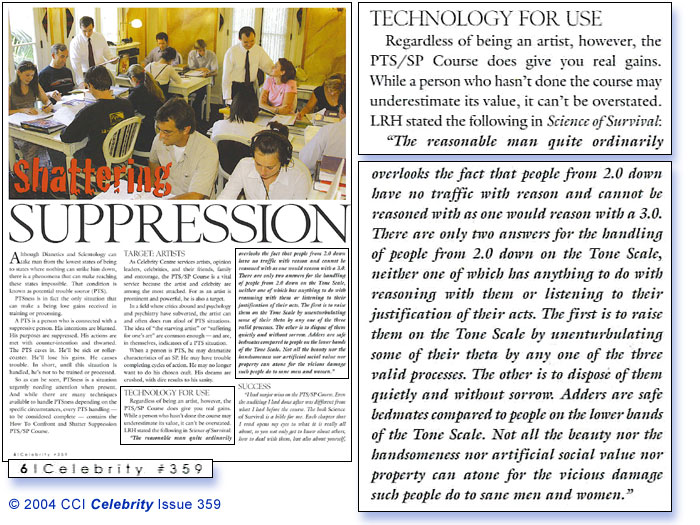 Regardless of being an artist, however, the PTS/SP Course does give you real gains. While a person who hasn’t done the course may underestimate its value, it can’t be overstated. LRH stated the following in Science of Survival:

“The reasonable man quite ordinarily overlooks the fact that people from 2.0 down have no traffic with reason and cannot be reasoned with as one would reason with a 3.0. There are only two answers for the handling of people from 2.0 down on the Tone Scale, neither one of which has anything to do with reasoning with them or listening to their justification of their acts. The first is to raise them on the Tone Scale by unenturbulating some of their theta by anyone of the three valid processes. The other is to dispose of them quietly and without sorrow. Adders are safe bedmates compared to people on the lower bands of the Tone Scale. Not all the beauty nor the handsomeness nor artificial social value nor property can atone for the vicious damage such people do to sane men and women.”