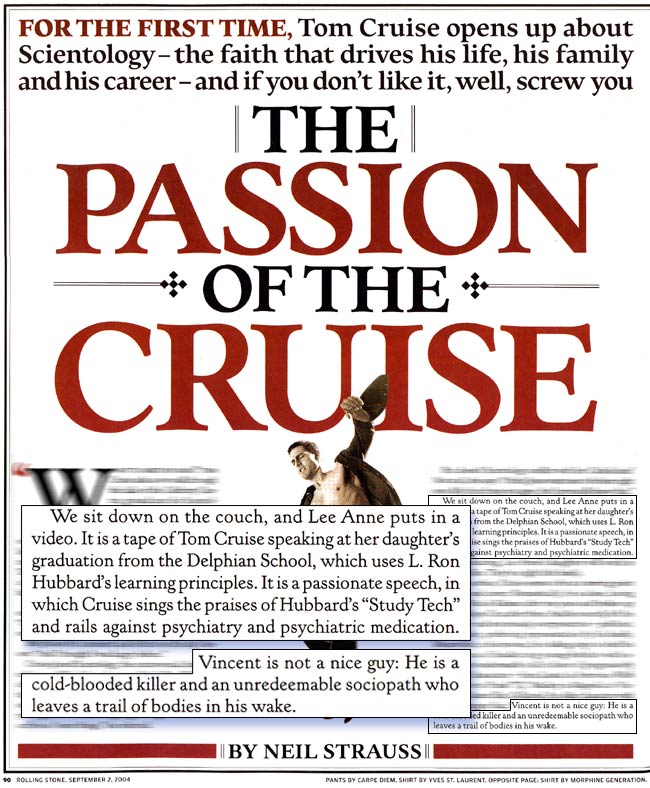 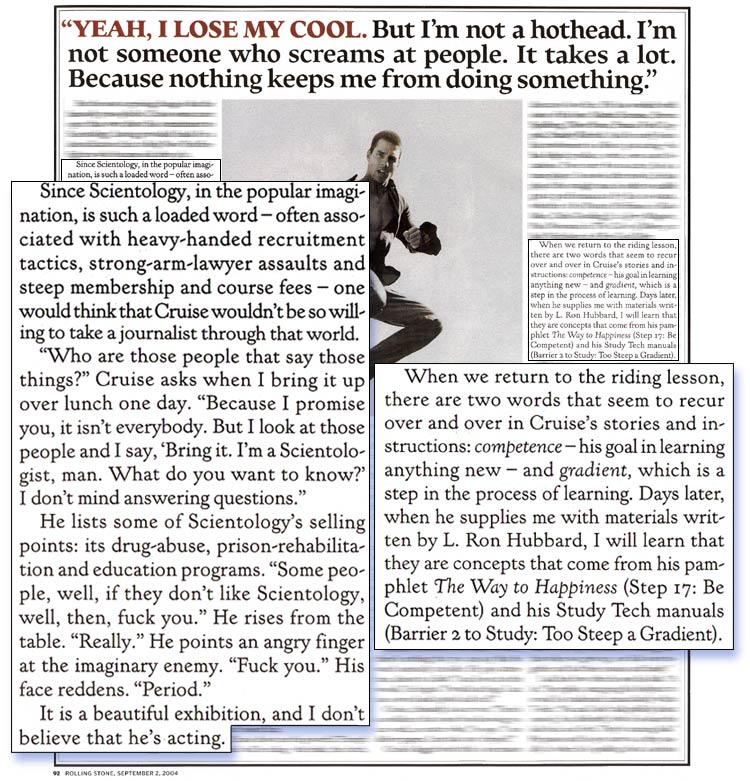 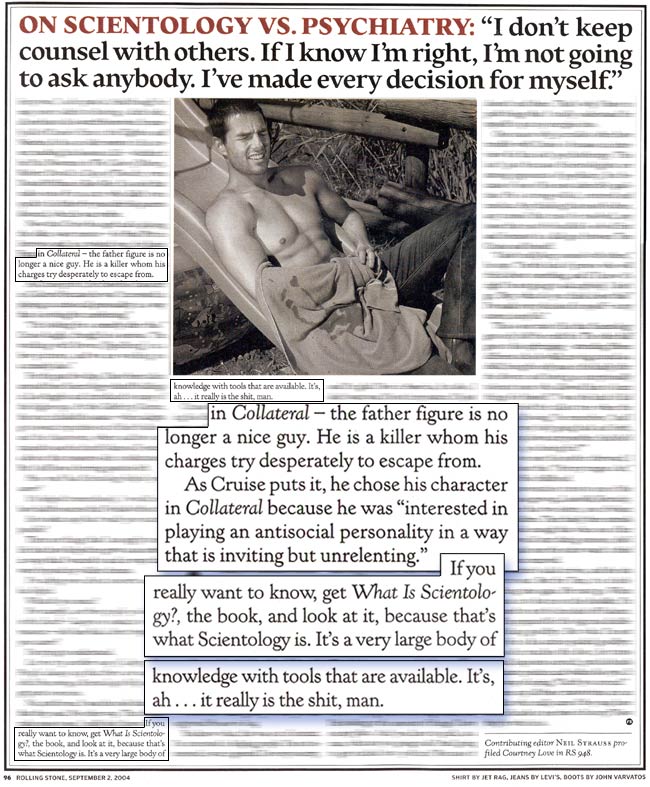 FOR THE FIRST TIME, Tom Cruise opens up about Scientology — the faith that drives his life, his family and his career — and if you don’t like it, well, screw you

We sit down on the couch, and Lee Anne puts in a video. It is a tape of Tom Cruise speaking at her daughter’s graduation from the Delphian School, which uses L. Ron Hubbard’s learning principles. It is a passionate speech, in which Cruise sings the praises of Hubbard’s “Study Tech” and rails against psychiatry and psychiatric medication.

Vincent is not a nice guy: He is a cold-blooded killer and an unredeemable sociopath who leaves a trail of bodies in his wake.

Since Scientology, in the popular imagination, is such a loaded word  — often associated with heavy-handed recruitment tactics, strong-arm-lawyer assaults and steep membership and course fees — one would think that Cruise wouldn’t be so willing to take a journalist through that world.

“Who are those people that say those things?” Cruise asks when I bring it up over lunch one day. “Because I promise you, it isn’t everybody. But I look at those people and I say, ‘Bring it. I’m a Scientologist, man. What do you want to know?’ I don’t mind answering questions.”

He lists some of Scientology’s selling points: its drug-abuse, prison-rehabilitation and education programs. “Some people, well, if they don’t like Scientology, well, then, fuck you.” He rises from the table. “Really.” He points an angry finger at the imaginary enemy. “Fuck you.” His face reddens. “Period.”

It’s a beautiful exhibition, and I don’t believe that he’s acting.

When we return to the riding lesson there are two words that seem to recur over and over in Cruise’s stories and instructions: competence —  his goal in learning anything new — and gradient, which is a step in the process of learning. Days later, when he supplies me with materials written by L. Ron Hubbard, I will learn that they are concepts that come from his pamphlet The Way to Happiness (Step 17: Be Competent) and his Study Tech manuals (Barrier 2 to Study: Too Steep a Gradient).

ON SCIENTOLOGY VS. PSYCHIATRY: “I don’t keep counsel with others. If I know I’m right, I’m not going to ask anybody. I’ve made every decision for myself.”

the father figure is no longer a nice guy. He is a killer whom his charges try desparately to escape from.

As Cruise puts it, he chose his character in Collateral because he was “interested in playing an antisocial personality in a way that is inviting but unrelenting.”

If you really want to know, get What Is Scientology?, the book, and look at it, because that’s what Scientology is. It’s a very large body of knowledge with tools that are available. It’s, ah…it really is the shit, man.