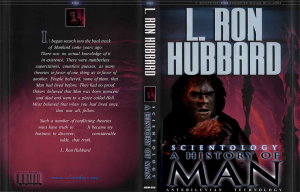 THIS IS a cold-blooded and factual account of your last 76 trillion years.

The test of any knowledge is its usefulness. Does it make one happier or more able? By it and with it, can he better achieve his goals?

This is useful knowledge. With it the blind again see, the lame walk, the ill recover, the insane become sane and the sane become saner. By its use the thousand abilities Man has sought to recover become his once more.

Like all useful knowledge it was hardly won. I began search into the back track of Mankind some years ago. There was no actual knowledge of it in existence. There were numberless superstitions, countless guesses, as many theories in favor of one thing as in favor of another. People believed, some of them, that Man had lived before. They had no proof. Others believed that Man was born innocent and died and went to a place called Hell. Most believed that when you had lived once, that was all, fellow.

Such a number of conflicting theories must have truth in them. It became my business to discover, against considerable odds, that truth.

In the first place, there was something wrong with Man. An animal such as a cat, even a reptile, a lizard, had habit patterns which carried him through his early days. Not Man. Why not? As usual, a lot of vagueness answered this. The very schools of “thought” that said Man was “just another animal” bogged utterly on why it was that babies, the young of this very intelligent animal, are much more stupid than kittens. That was only one thing wrong with Man that wasn’t explained.

The further one investigated, the more one came to understand that here, in this creature Homo sapiens, were entirely too many unknowns. People who suddenly, out of no observable training, begin to speak foreign tongues, men who “seem to remember having been here before,” strange yearnings in people for various parts of the country or the world or the stars of which they have no actual knowledge—such things are routine puzzles.

And there was a much more important thing at work than mere curiosity. Now and then, in my auditing, I would discover a case which would be extremely reluctant to recover and then would recover only partially so long as I used data from the current lifetime of the preclear. But as soon as I used the whole span of the time track—about 76 trillion years—I could obtain immediate response.

One must be very impartial, even brutal, in investigation. The last series of cases I audited—twenty in number, chosen at random from various life strata and suffering from mental and physical ills which were extremely varied—were audited to demonstrate finally to myself one thing only: Can an auditor obtain a swift recovery by auditing the current lifetime only? I used the most modern of techniques—1952—and did a standard auditing address to the current lifetime of each one. I obtained mediocre results, partial recoveries, slight betterment in attitude. Then I audited each case addressing only past track, prior to this lifetime. The results were swift and spectacular. Thus I validated, for myself, the reality that in auditing the whole track, one can obtain excellent results; that in auditing the current lifetime, one can obtain slow and mediocre results. From this series came this conclusion:

THE AUDITOR WHO INSISTS ON AUDITING THE CURRENT LIFETIME ONLY, WHEN HE HAS THE WHOLE TRACK TECHNIQUE AVAILABLE, IS WASTING TIME AND EFFORT AND IS, IN FACT, SWINDLING HIS PRECLEAR.

I announced “whole track” techniques to a large number of auditors. I found the better auditors quite willing to use them and these immediately began to obtain miracle-level results. A very few held back, were very cautious, would not employ the whole track, clung to this lifetime, invalidated the E-Meter, invalidated what they erroneously called “past lives,” were scathingly critical of my employing such data. So I investigated the auditors. Several of these were given sessions by me. I found several noteworthy similarities about them. They were so low in tone it was almost impossible to get them to register on an old-style Mathison.

Their cases were utterly bogged. They generally made a practice of refusing any auditing. Their general record with preclears was very poor. Their own lives were running badly. They  not only fought “past lives,” as they called whole track, but they fought any technique evolved since the summer of 1950 or used later techniques poorly. They would not run any “overt acts,” even in this lifetime. They needed, so far as their cases were concerned, the most careful auditing. I found two people, not auditors, who objected violently to “past lives” and who were “wide-open” cases. Both were in the inaccessible band, both had unsavory social records, both protested being audited in any incident of any kind. I concluded, therefore, that the relatively sane are capable of accepting evidence and the insane are not.

Occasionally people have told me that I should not release the data contained in this volume because there would be a repercussion throughout the country which would ruin Dianetics forever. Oddly enough, I’ve been unable to discover this repercussion. I have found people alert and friendly toward this data. Whole track is evidently much more acceptable than the idea of a prenatal. And, witness a recent Reader’s Digest, even the medical profession is accepting prenatals.

Further, it is very hard to argue with a miracle. Today, Eleanor has arthritis. She is audited whole track with 1952 techniques. Tonight, she doesn’t have arthritis. Miracles using whole track are plentiful. By using this data, an auditor can obtain a MEST Clear rather easily. But the best argument which can be advanced for whole track is that it is factual. By using this knowledge, more is obtained than auditing results. A preclear suddenly recovers the ability, carefully learned eighty years ago, to play a piano; an electronics engineer, doing poorly before, suddenly wraps up formulas that would puzzle Einstein and which may get Man off Earth; and a thousand details in a hundred sciences become clear.

The search of this track began some years ago and was conducted sporadically on many preclears. Various instruments such as the electroencephalograph and the police lie detector were used to further this search, but these were inadequate and limited for my purposes. Finally, Volney Mathison applied his electronic genius to the problem and invented the Electropsychometer. This instrument had a range and ability greatly in excess of anything before known. It compares to itself only in the field of physioelectrical mensuration and to existing devices as the electronic microscope compares to looking through a quartz stone. As soon as this instrument was turned loose on the problem, the problem ceased to exist. By adding up and checking probabilities on scores of persons, the character, extent and content of the whole track were mapped.

Once the E-Meter gave reliable data, the main problem became the estimation of intentions, of sources, of the reasons behind the reasons. Most of this work has been done.

It comments poorly on Man’s dullness that this project was impeded and slowed greatly by lack of funds and by very active efforts on the part of some to acquire and own the copyrights of Dianetics—may the ill of the world forgive them. Thus the map is not as complete in this issue as it might be.

This work is honest research, done with considerable care. And it will bear up under survey by any competent auditor or investigator.

The most amusing aspect of the whole track is that this work bears up under the onslaught of police lie detector experts. These, hard-eyed and uncompromising, become startled half out of their wits to discover that some of the crimes they find on their machines were committed two or three “lives” ago by the criminal under test and that, most alarmingly, the crimes so discovered are discoverable again to the last detail in the police archives. This is very upsetting to these operators—to be informed so bluntly that Man lives many years, not threescore and ten, and that today’s lifer may again be on their hands tomorrow as a juvenile delinquent!

Gravestones, ancient vital statistics, old diplomas and medals will verify in every detail the validity of “many lifetimes.” Your E-Meter will tell you.